The gameplay is a wave-based shooter, where the players mow down hordes of space bugs with a heavy mass, high recoil, turret-mounted weapon. This simple, attendant-free VR experience is a thrilling, competitive alien encounter that is fun for players of any age or skill level. With multiple levels and alternate environments, Total Recoil will drive repeat play again and again. 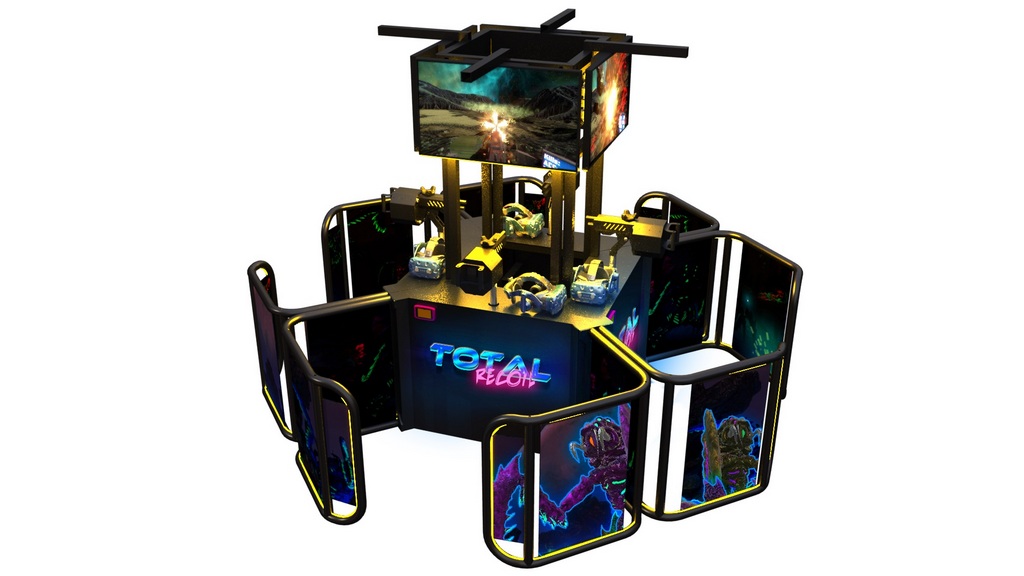 From Armory to Arcade

Total Recoil sprang up from a very unlikely place. Raydon is a small company that has made a name for itself in military simulation training. “Train as you fight” is the mantra the military uses when assessing training applications, and Raydon has been able to create virtual reality training experiences attached to functionally accurate simulated vehicles and weapons, with exercises that track individual and team performance against published combat doctrine.

For most of the last 20 years, VR technology was still in its infancy and Raydon stayed ahead of the curve by designing modular hardware frameworks that maximized the use of commercial components, and a standard software baseline that allowed systems to be interconnected. Being able to train an individual soldier or an entire company on the same system was groundbreaking stuff. As the war began to wind down Raydon sought to stay ahead of the curve by seeking new ways to channel innovation. Raydon’s founders, engineers Don Ariel (CEO) and Dave Donovan (COO), came up with an idea called Work This Friday (WTF) which gave engineers and developers free rein every other Friday to work on passion projects, regardless of the market. They made pitches to the entire company and all but senior management got to vote on which projects would be funded. These pitches included ideas well outside the company’s normal defense realm such as a cooking simulator, a language translator, a bobsleigh trainer, and several video games, including one called Taste of Liberty.

Taste of Liberty was the brainchild of a Raydon software developer Tony Jones, whose initial product description called it “an adrenaline packed, shoot ‘em up experience. The player’s input is a realistic feeling, stationary, high caliber weapon. The design is simple so that anyone can pick up the game’s mechanics quickly, like an arcade game.”

Total Recoil grew out of a highly effective gunnery trainer, developed by Raydon to teach US Army warfighters how to operate .50 caliber machine guns. Jones and the Raydon team adapted the Unstabilized Gunnery Trainer® (UGT) for the higher resolution graphics and upgraded headset needed for an exciting arcade experience.

“The road from Armory to Arcade has been a great adventure and one that is propelling our technology from the hands of the soldier to general public. We are very excited to see where it goes from here,” said Ariel.

But the road from Armory to Arcade took a couple of detours, starting with Daytona Bike Week 2017. Daytona is just a few miles north of Raydon’s headquarters and the market test was a big success. Some typical comments: “The reality of it all and how skilled you must be to handle this type of weapon.” “It was very cool to have the feel of a real weapon in a video game platform.” “The feedback/recoil the gun rig offered, and the laser sight that helped with aiming.”

Still attached to the UGT, Taste of Liberty was adapted into a recruiting tool that traded enemy combatants for space spiders. Generals and other high-profile visitors to Raydon loved the game, and so did the families of Raydon employees and visitors to the Raydon booth at military trade shows. But there was no defined technical requirement, so there was no clear sales path for the product. So a new team was assigned to overhaul of the Taste of Liberty concept and create the arcade experience, and Total Recoil was born.

Total Recoil’s tough hardware design was born out of the military’s need for rugged solutions to handle many locations and climates around the world. The weapon recoil and accurate ballistics come from the “train as you fight” mantra and give a cognitive and tactile fidelity to this exhilarating experience. As for the visuals and gameplay … Tony Jones is a big fan of old school video games and he wanted to bring a challenging sense of fun to the game.

The backstory begins: “The year is 2099 AD. Three colonial ships are on route to a promising planet 28 lightyears from Earth that can sustain human life…. After the ship crash lands and the dust settles, the Space Marines take up positions on the ship’s external guns when they spot several bugs approaching the ship.”

The Space Marines are in a tough spot. They just need to buy some time until the engineers can get the ship back up and running. The M2 machine gun is the perfect weapon – rugged, powerful — but the Big Bugs just keep coming.

Raydon Amusement is the latest technology division within Raydon Corporation, a leading provider of simulation and training equipment in the defense industry for 30 years. We’ve designed, developed, fielded, and currently support over 2,000 active simulation devices across the US armed forces. These devices leverage game engine and VR technology. With the recent advances in consumer-grade VR tech, we believe the time is right to offer exciting new experiences to the Amusement market, informed by our background in human science, gaming technology and VR development.