The Straz Center for the Performing Arts is proud to announce the 2019-2020 Bank of America Broadway at The Straz season. The slate includes Roald Dahl’s Charlie and the Chocolate Factory, Disney’s Aladdin, the hilarious hit musical Mean Girls from an award-winning creative team, and the electric Summer: The Donna Summer Musical along with stunning revivals of Fiddler on the Roof, the 2018 Tony Award® winner for Best Revival of a Musical Once on This Island, Miss Saigon and the Lincoln Center Theater production of My Fair Lady. The series also includes Spymonkey’s Hysteria in the Straz Center’s intimate Jaeb Theater.

In addition to the nine-show Broadway series The Straz will also present Jesus Christ Superstar and The SpongeBob Musical.

“I am thrilled that we able to bring such well-loved and much-anticipated shows to the Tampa Bay area this season,” said Straz Center President and CEO Judy Lisi. “We have a truly exciting mix of new shows and stunning revivals of Tony-winning shows. Whether you love the spectacle and romance of the heavy-hitters from the 20th century or are inspired by the next generation of Broadway musicals, we’ll have something for everyone. We can’t wait to share the season with you.”

Roald Dahl’s amazing tale is now Tampa’s golden ticket! It’s the perfect recipe for a delectable treat: songs from the original film, including “Pure Imagination,” “The Candy Man” and “I’ve Got a Golden Ticket,” alongside a toe-tapping and ear-tickling new score from the songwriters of Hairspray.

Willy Wonka is opening his marvelous and mysterious chocolate factory … to a lucky few. That includes Charlie Bucket, whose bland life is about to burst with color and confection beyond his wildest dreams. He and four other golden ticket winners will embark on a mesmerizing joyride through a world of pure imagination. Now’s your chance to experience the wonders of Wonka like never before – get ready for Oompa-Loompas, incredible inventions, the great glass elevator and more, more, more at this everlasting showstopper!

Fiddler on the Roof

Tony-winning director Bartlett Sher and the team behind South Pacific, The King and I and 2017 Tony-winning Best Play Oslo, bring a fresh and authentic vision to this beloved theatrical masterpiece from Tony winner Joseph Stein and Pulitzer Prize winners Jerry Bock and Sheldon Harnick.

The original production won ten Tony Awards, including a special Tony for becoming the longest-running Broadway musical of all time. You’ll be there when the sun rises on this new production, with stunning movement and dance from acclaimed Israeli choreographer Hofesh Shechter, based on the original staging by Jerome Robbins. A wonderful cast and a lavish orchestra tell this heartwarming story of fathers and daughters, husbands and wives, and the timeless traditions that define faith and family.

Featuring the Broadway classics “Tradition,” “If I Were a Rich Man,” “Sunrise, Sunset,” “Matchmaker, Matchmaker” and “To Life,” FIDDLER ON THE ROOF will introduce a new generation to this uplifting celebration that raises its cup to joy! To love! To life!

Once on This Island

“What a delight it is to enter the world of ONCE ON THIS ISLAND!” raves The New York Times.

Winner of the 2018 Tony Award for Best Revival of a Musical, ONCE ON THIS ISLAND is the sweeping, universal tale of Ti Moune, a fearless peasant girl in search of her place in the world, and ready to risk it all for love. Guided by the mighty island gods, Ti Moune sets out on a remarkable journey to reunite with the man who has captured her heart.

The groundbreaking vision of two-time Tony Award-nominated director Michael Arden (Spring Awakening revival) and acclaimed choreographer Camille A. Brown (NBC’s Jesus Christ Superstar Live) conjures up “a place where magic is possible and beauty is apparent for all to see!” (The Huffington Post). With a score that bursts with life from Lynn Ahrens and Stephen Flaherty, the Tony Award-winning songwriters of Anastasia and Ragtime, ONCE ON THIS ISLAND is a timeless testament to theater’s unlimited possibilities.

From the producer of The Lion King comes the timeless story of ALADDIN, a thrilling new production filled with unforgettable beauty, magic, comedy and breathtaking spectacle. It’s an extraordinary theatrical event where one lamp and three wishes make the possibilities infinite.

Directed and choreographed by Tony Award winner Casey Nicholaw (The Book of Mormon, Something Rotten!), this “Fabulous” and “Extravagant” (The New York Times) new musical boasts an incomparable design team, with sets, costumes and lighting from Tony Award winners Bob Crowley (Mary Poppins), Gregg Barnes (Kinky Boots) and Natasha Katz (An American in Paris). See why audiences and critics agree, ALADDIN is “Exactly What You Wish For!” (NBC-TV). 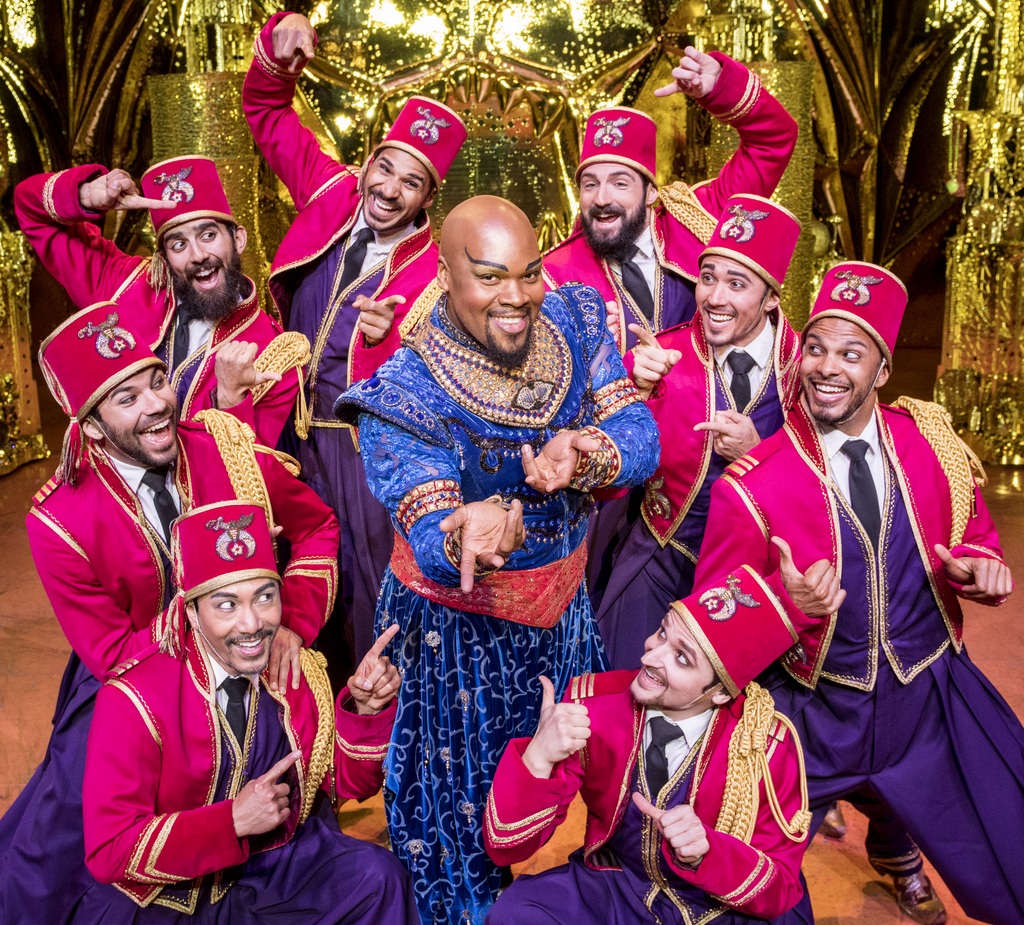 Cady Heron may have grown up on an African savanna, but nothing prepared her for the vicious ways of her strange new home: suburban Illinois. Soon, this naïve newbie falls prey to a trio of lionized frenemies led by the charming but ruthless Regina George. But when Cady devises a plan to end Regina’s reign, she learns the hard way that you can’t cross a Queen Bee without getting stung.

New York Magazine cheers, “MEAN GIRLS delivers with immense energy, a wicked sense of humor and joyful inside-jokery.” USA Today says, “We’ll let you in on a little secret, because we’re such good friends: GET YOUR TICKETS NOW!”

“A DYNAMITE BROADWAY REVIVAL.” – The New Yorker. Experience the acclaimed new production of the legendary musical MISS SAIGON, from the creators of Les Misérables. This is the story of a young Vietnamese woman named Kim who is orphaned by war and forced to work in a bar run by a notorious character known as the Engineer. There she meets and falls in love with an American G.I. named Chris, but they are torn apart by the fall of Saigon. For 3 years, Kim goes on an epic journey of survival to find her way back to Chris, who has no idea he’s fathered a son. Featuring stunning spectacle and a sensational cast of 42 performing the soaring score, including Broadway hits like “The Heat is On in Saigon,” “The Movie in My Mind,” “Last Night of the World” and “American Dream,” this is a theatrical event you will never forget. “THE NEW MISS SAIGON SOARS TO THE RAFTERS!” – NY1

“THE AUDIENCE REACHES A FEVER PITCH.  IF YOU’RE LOOKIN’ FOR HOT STUFF ON BROADWAY, YOU’VE COME TO THE RIGHT PLACE. SUMMER delivers the seasonal sunshine with toe-tappingly familiar songs, stellar performances, shiny costumes, and a reminder of the impact of its subject on the music industry at large.”  Entertainment Weekly

She was a girl from Boston with a voice from heaven, who shot through the stars from gospel choir to dance floor diva. But what the world didn’t know was how Donna Summer risked it all to break through barriers, becoming the icon of an era and the inspiration for every music diva who followed. With a score featuring more than 20 of Summer’s classic hits including “Love to Love You Baby,” “Bad Girls” and “Hot Stuff,” this electric experience is a moving tribute to the voice of a generation.

From Lincoln Center Theater that brought you The King & I and South Pacific, comes “a sumptuous new production of the most perfect musical of all time” (Entertainment Weekly), Lerner & Loewe’s MY FAIR LADY.  Director Bartlett Sher’s glowing production is “thrilling, glorious and better than it ever was” (The New York Times). “Every so often a revival comes along that reminds you how indispensable great theater can be” (NY1).

Boasting such classic songs as “I Could Have Danced All Night,” “The Rain in Spain,” “Wouldn’t It Be Loverly” and “On the Street Where You Live,” MY FAIR LADY tells the story of Eliza Doolittle, a young Cockney flower seller, and Henry Higgins, a linguistics professor who is determined to transform her into his idea of a “proper lady.” But who is really being transformed?

Hitchcock’s Rebecca meets The Pink Panther. Spymonkey’s deliciously demented take on the pulp gothic romance overflows with brilliant characters, rip-roaring farce and virtuoso physical comedy. This is the show which made them an international comedy sensation from Just For Laughs Montreal to Sydney Opera House.

A spooky mansion, a plucky young heroine and a handsome English aristocrat. Add a German butler and a Spanish soap star and you’re all set for a night of HYSTERIA with Spymonkey!

“One of the funniest pieces of theatre you will ever see, performed by four of the greatest clowns working in Britain.” Time Out(UK)

In addition to the nine-show Broadway series The Straz will present:

JESUS CHRIST SUPERSTAR is an iconic musical phenomenon with a world-wide fan base. In celebration of its 50th anniversary, a new mesmerizing production comes to North America. Originally staged by London’s Regent’s Park Open Air Theatre and helmed by the acclaimed director Timothy Sheader (Crazy for You, Into the Woods) and award-winning choreographer Drew McOnie(King Kong, Strictly Ballroom), this production won the 2017 Olivier Award for Best Musical Revival garnering unprecedented reviews and accolades. Appealing to both theater audiences and concert music fans, this production pays tribute to the historic 1971 Billboard Album of the Year while creating a modern, theatrical world that is uniquely fresh and inspiring.

With music and lyrics by Emmy®, Grammy®, Oscar and Tony winners Andrew Lloyd Webber and Tim Rice, JESUS CHRIST SUPERSTAR is set against the backdrop of an extraordinary series of events during the final weeks in the life of Jesus Christ as seen through the eyes of Judas. Reflecting the rock roots that defined a generation, the legendary score includes “I Don’t Know How to Love Him,” “Gethsemane” and “Superstar.”

A legendary roster of GrammyAward winners. A visionary director and a Tony Award-winning design team. One of the world’s most beloved characters. Turn them loose on stage and what do you get? The bold, original musical The New York Times declares, “BRILLIANT!”

“Wonders pour from the stage in a ravishing stream of color and invention” (Time Out New York) as Broadway’s best creative minds reimagine and bring to life the beloved Nickelodeon series with humor, heart and pure theatricality in a neon-sparkly “party for the eyes and ears” (Daily Beast). Be there when SpongeBob and all of Bikini Bottom face catastrophe – until a most unexpected hero rises to take center stage. This “creative explosion” (Broadway.com) is “nothing short of genius” says Theatermania, so bring the entire family to celebrate friendship and cooperation and learn about the power of unity and inclusion.

Get ready to enjoy the “Broadway Extravaganza” (The New Yorker) that New York Magazine calls “effervescent candy-for-the-spirit.” Explore the depths of theatrical innovation in Nickelodeon’s THE SPONGEBOB MUSICAL, 2018 Best Musical winner of the Drama Desk and Outer Critics Circle Awards, where the power of optimism really can save the world.


New season ticket orders will be limited and will be handled in the order they are received. Prices for the nine-show season package range from $243.50 to $898.00. For more information, email the Straz Center at tickets@strazcenter.org or call the Straz Center Ticket Sales Office at 813.229.STAR (7827) or outside the Tampa Bay area at 800.955.1045 or visit www.strazcenter.org. Individual show tickets will go on sale at a later date, to be announced.