As the Florida manatee population continues to struggle with watercraft injuries, severe weather, and red tide, many young manatees become orphans in need of human assistance. That’s why the Manatee Rescue & Rehabilitation Partnership (MRP), a cooperative group of non-profit, private, state, and federal entities dedicated to the rescue, rehabilitation, release, and monitoring of manatees, was established and remains critical to the survival of this treasured key species.

Two of its members, ZooTampa, which operates the David A. Straz, Jr. Manatee Critical Care Center, one of only two facilities in the United States federally permitted to take in and care for orphaned calves, and Cincinnati Zoo & Botanical Garden, a second-stage rehabilitation facility, worked together recently to transfer three manatees to their new temporary home in Cincinnati. 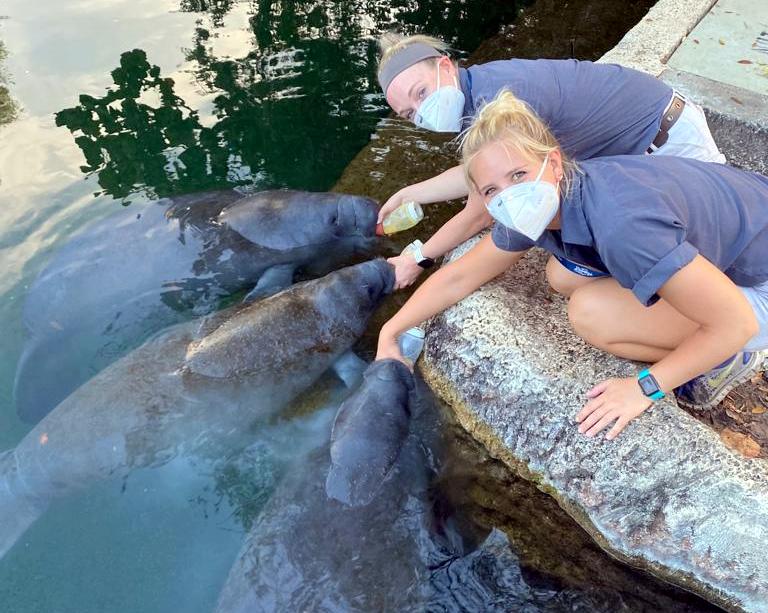 All three female manatees were rescued as orphaned calves by the Florida Fish and Wildlife Conservation Commission (FWC) in 2021, about two months apart from each other, and have been in the care of manatee rehabilitation experts at ZooTampa since their rescue.

Piccolina (“little one” in Italian) was ZooTampa’s tiniest female orphan calf ever treated at its critical care center. When she was rescued from the Gulf of Mexico near Venice, Fla. in August 2021, she weighed just 44 pounds, about the same as a medium-sized bag of puppy food. She has been doing very well and now weighs 375 pounds. Calliope arrived in April 2021 after being found in Cayo Costa Pine Sound with her umbilical cord still partially attached. She currently weighs over 400 pounds. Soleil was rescued in June 2021 in Bradenton after she had reportedly been staying in a residential canal for several days. She required immediate veterinary attention for an infected umbilicus and has since fully recovered from the infection. She currently weighs a healthy 475 pounds.

“Piccolina, Calliope, and Soleil have amazing stories of survival and resiliency, and each are doing extremely well. We are confident that with continued care at the Cincinnati Zoo, their successful journey will continue as they move towards the eventual goal of returning to Florida waters,” stated Dr. Cynthia Stringfield, senior vice president of animal health, conservation, and education at ZooTampa. “While it’s bittersweet to say goodbye to the trio, their move allows us to continue our steadfast commitment to save Florida’s iconic species as we head into the critical winter months.”

“The three females, Calliope, Piccolina, and Soleil arrived in Manatee Springs on Saturday and are doing well,” said Cincinnati Zoo’s curator of mammals, Kim Scott. “They were cared for together at ZooTampa, and have been inseparable during their entire rehabilitation journey. So it makes sense for them to continue their care together as they adjust to their new surroundings.”

Cincinnati Zoo’s job as a rehab facility is to provide plenty of food, primarily lettuce, and veterinary care until the manatees are big and strong enough to be returned to Florida waters. It has cared for 26 manatees, including the three new residents since Manatee Springs opened in 2000.

“We are proud to collaborate with ZooTampa and other MRP partners to help make a difference for manatees,” said Scott. “The critical care facilities in Florida are at capacity, and by providing homes for some of the manatees that are ready for the next phase in their rehabilitation journeys we help to open up space for more rescued animals.”

Cincinnati Zoo is one of only a handful of places outside of Florida where people can see manatees and learn more about what can be done to protect them. ZooTampa is a leader in wildlife conservation in Florida and has cared for more than 500 injured, sick, and orphaned manatees. A dedicated team of animal care and medical staff tend to manatees 24 hours a day, 7 days a week.

Manatee photos and video taken by ZooTampa under USFWS Permit No. MA90101C