Time is running out to try some of the amazing culinary creations at the Epcot International Food & Wine Festival, which wraps up next Monday, November 14th. We visited the festival several times over the last two months, and sampled a number of the food options throughout the park. The corresponding stop number on the Epcot map is listed with each booth mentioned in the article below. 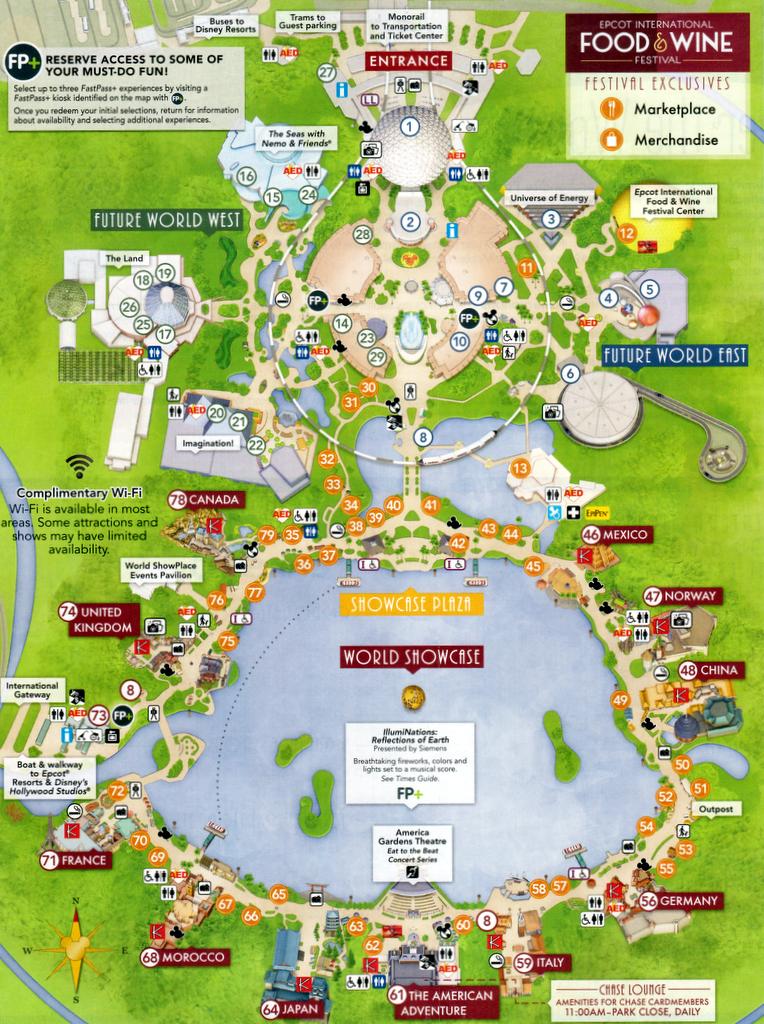 A good place to start a day of enjoying the Food & Wine Festival is at the Festival Center (#12), located in the former Wonders of Life pavilion in the Future World section of the park. Here you can grab your Food & Wine Passport booklet (if you didn’t already at the park entrance), purchase a variety of festival themed merchandise or wine, attend seminars, and watch episodes of The Chew in a small theater.

Also inside is The Chocolate Experience, where you can start your day off with a shot of Ghirardelli Drinking Chocolate ($2.50). It is just as advertised – like drinking a candy bar. It has a thick, almost syrup-like consistency, with a warm dark chocolate flavor. You can also get a free sample of Ghirardelli chocolate when visiting, learn about the chocolate making process, and see sculptures of Disney themed scenes made from chocolate.


The Food & Wine Festival grows larger each year, and in addition to the booths all around World Showcase, this year you will also find several extending into Future World. Located just behind Club Cool on along the path that meanders towards the Imagination pavilion, you’ll find the brand new Chew Collective and Greenhouse Guru stands.

At the Chew Collective (#30), we chose to sample the Peanut Butter and White Chocolate Mousse with a caramel drizzle ($3.25). It’s served in a slender plastic cup shaped like a shot glass, which is an interesting presentation but makes scooping it out a bit of a challenge. The flavor was more peanut butter than white chocolate, and was a bit dense. 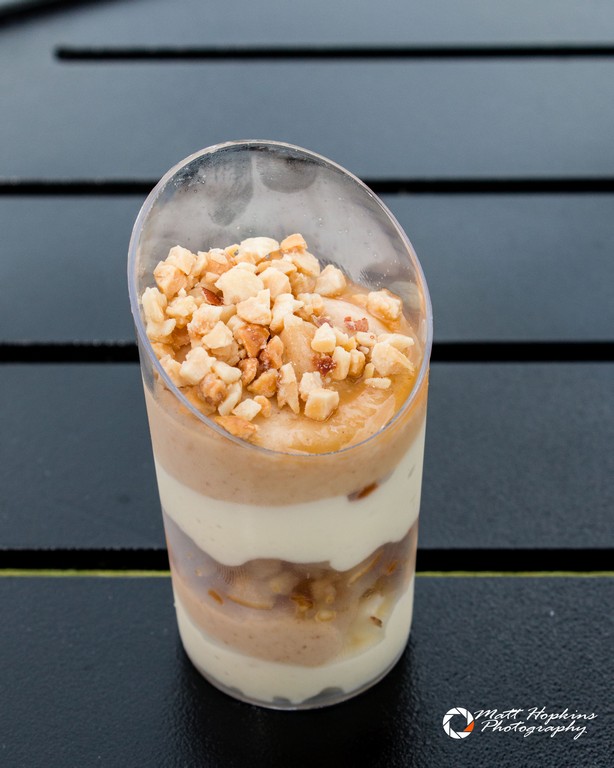 Further along the path heading towards World Showcase is Chocolate Studio (#32), where we tried the Red Wine Chocolate Truffle ($2.25). This is one of the least expensive options available at the festival, and in our opinion, one of the best tasting dessert options that we chose to try this year. It’s a small one or two bite item, but packs a great balance of chocolate and red wine flavor within. 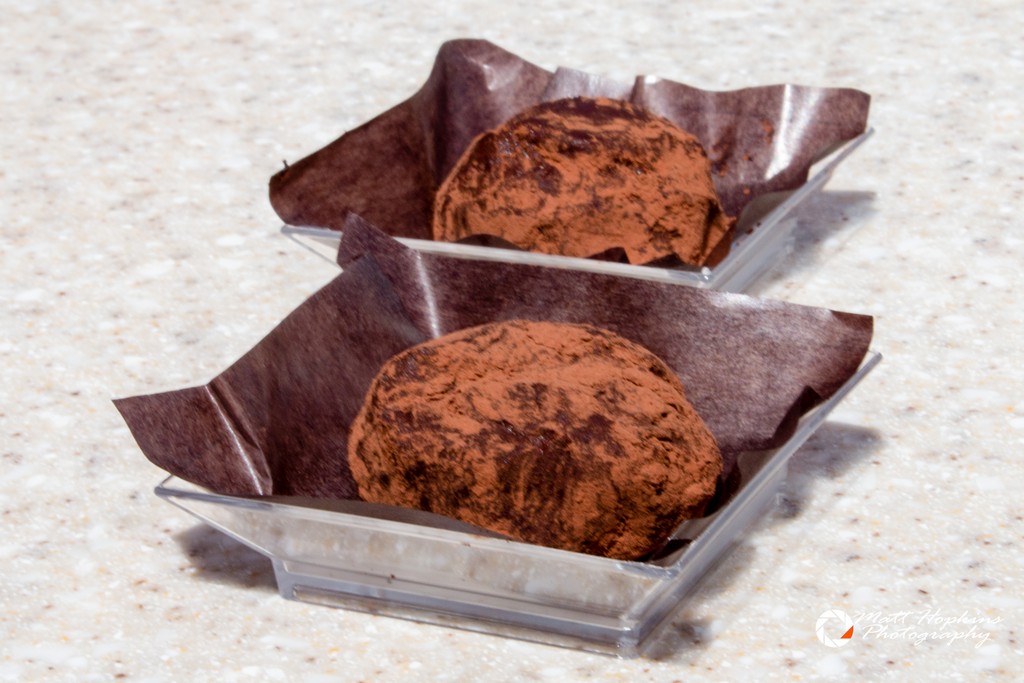 Continuing down the path and out onto World Showcase Plaza, the Greece stand (#36) offers several dishes, including a Chicken Gyro with Tzatziki Sauce featuring Oikos Greek Yogurt ($4.50). The Tzatziki sauce was tasty, but we found our gyro lacking chicken with only a couple of tiny pieces mixed on. 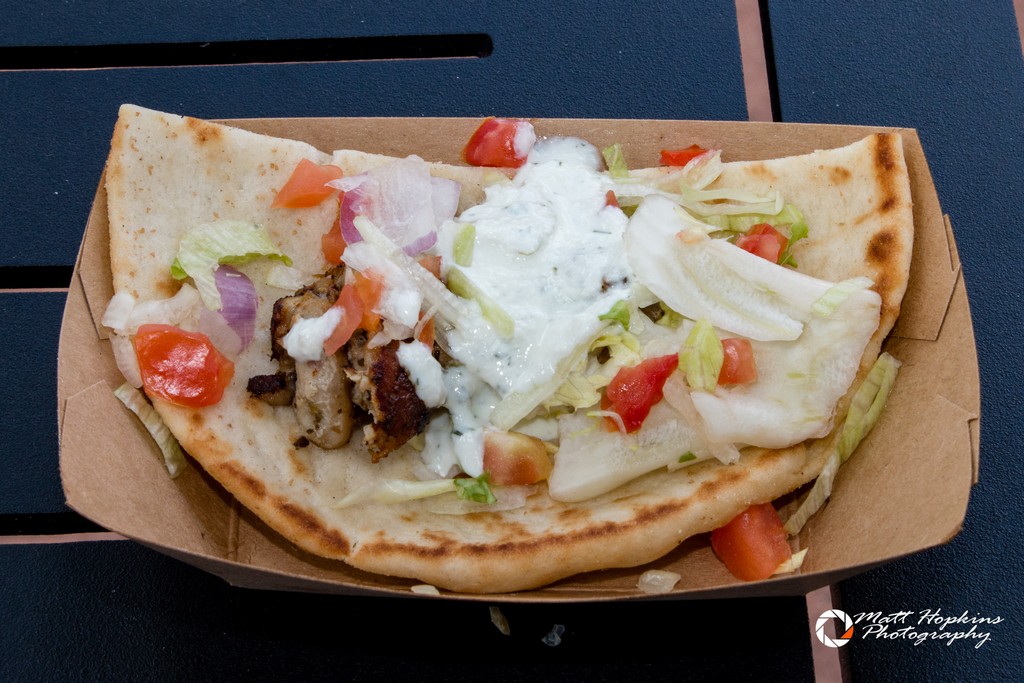 Located where the main path leading from the center of Future World enters World Showcase is Patagonia (#39) where we chose the Roasted Verlasso Salmon served with Quinoa Salad and Arugula Chimichurri ($5.50) The chimichurri does have a bit of a spicy kick to it, so if that’s an issue, ask for it on the side. 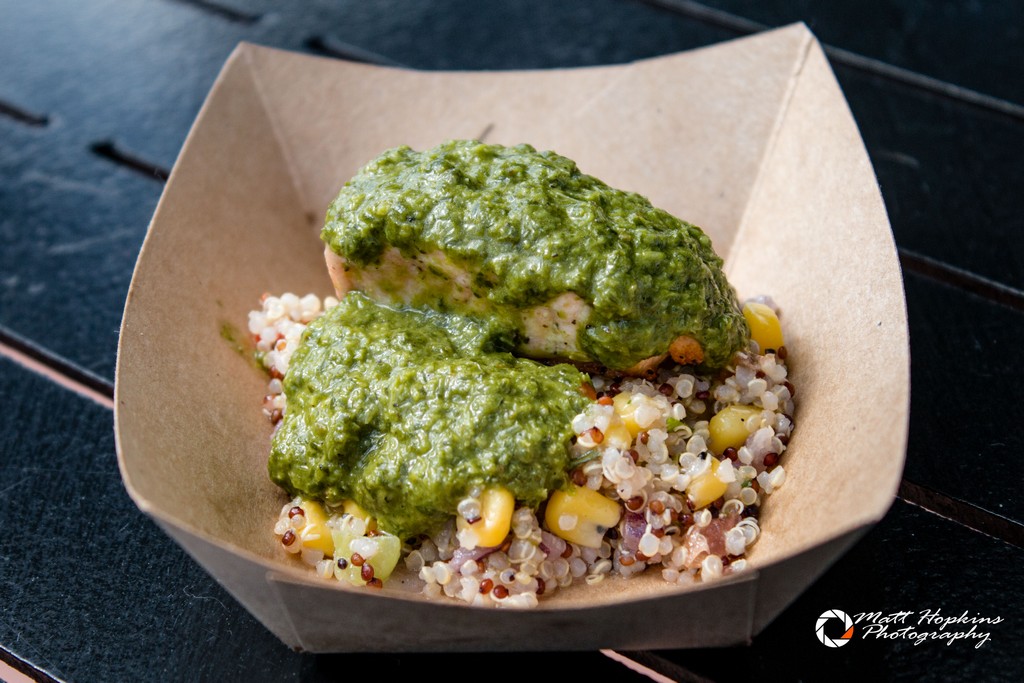 Closer to the Mexico pavilion are the stands for New Zealand (#43) and Australia (#44). From New Zealand, we tried the Seared Venison Loin served with wild mushroom Marsala sauce and Kumara dumpling ($6.25). At Australia, something sweeter caught our eye – Lamington, which is yellow cake dipped in chocolate and covered with shredded coconut ($3.00).

Continuing clockwise around World Showcase, we stopped at Germany Marketplace (#55) and sampled the Schinkennudeln – Pasta Gratin with Ham and Cheese ($3.75), and Apple Strudel with Vanilla Sauce ($3.75). The Schinkennudeln may be the largest portion for the price at any of the stands, and is very filling. The Apple Strudel had a good flavor, and hit the spot with something sweet that wasn’t chocolate based.

Jut a bit further along the promenade is Italy Marketplace (#58). Here we picked up Pennete alla Parmigiana, which is Baked Ziti and Chicken Parmigiana, Tomato Sauce, Mozzarella and Parmesan ($6.25). The presentation of the dish seemed the most inconsistent of any of the items we’ve tried more than once this season – one one occasion it was smothered in cheese and another it was much lighter. Still, both times the flavor was what you would expect from the traditional Italian dish. 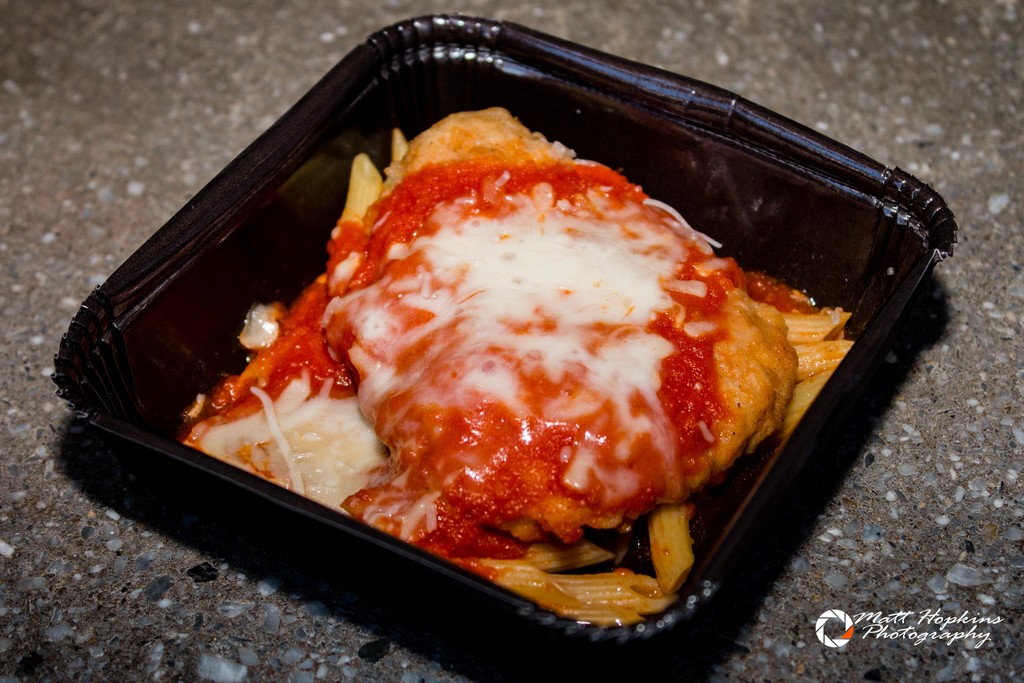 Outside the World Showcase host pavilion is Hops & Barley (#62). Here we picked up the Smoked Beef Brisket with Pimento Cheese on Griddled Garlic Toast ($5.25). There was a bit of heat from the Pimento Cheese, but not overpowering. Since the brisket is served on top of the garlic toast it did become soggy, which was disappointing. 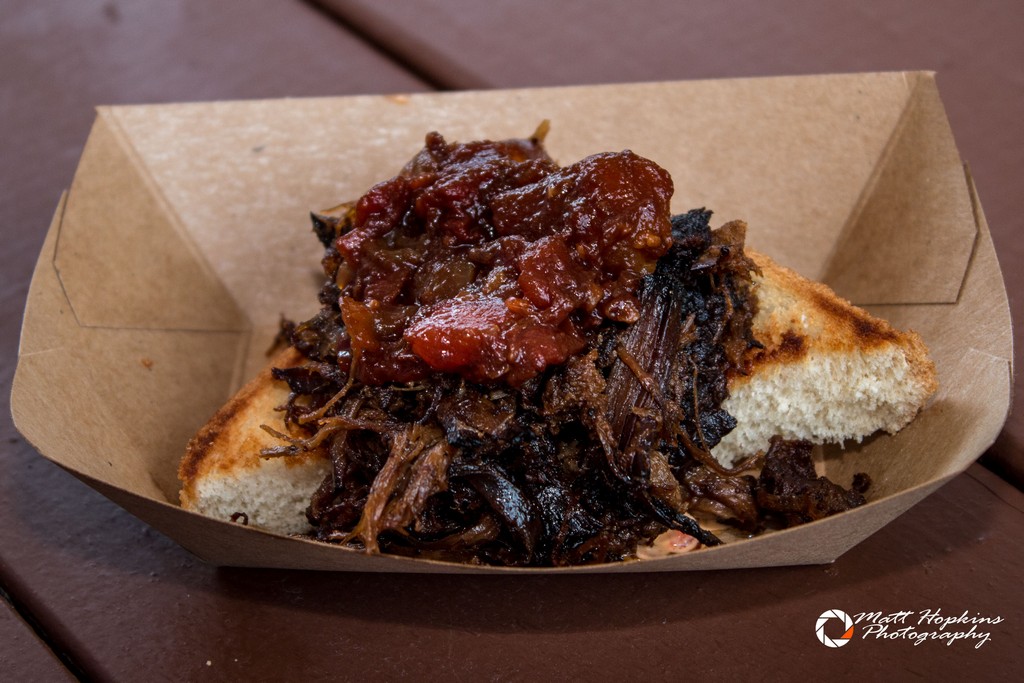 Past Morocco, Belgium (#69) offers several options. We chose the Beer-braised Beef with Smoked Gouda Mashed Potatoes ($4.75 – not pictured) and a Belgian Waffle with Warm Chocolate Ganache and Whipped Cream ($3.75). The waffle was delicious, but would have been better prepared with the chocolate poured over the waffle first, then the whipped cream on top. 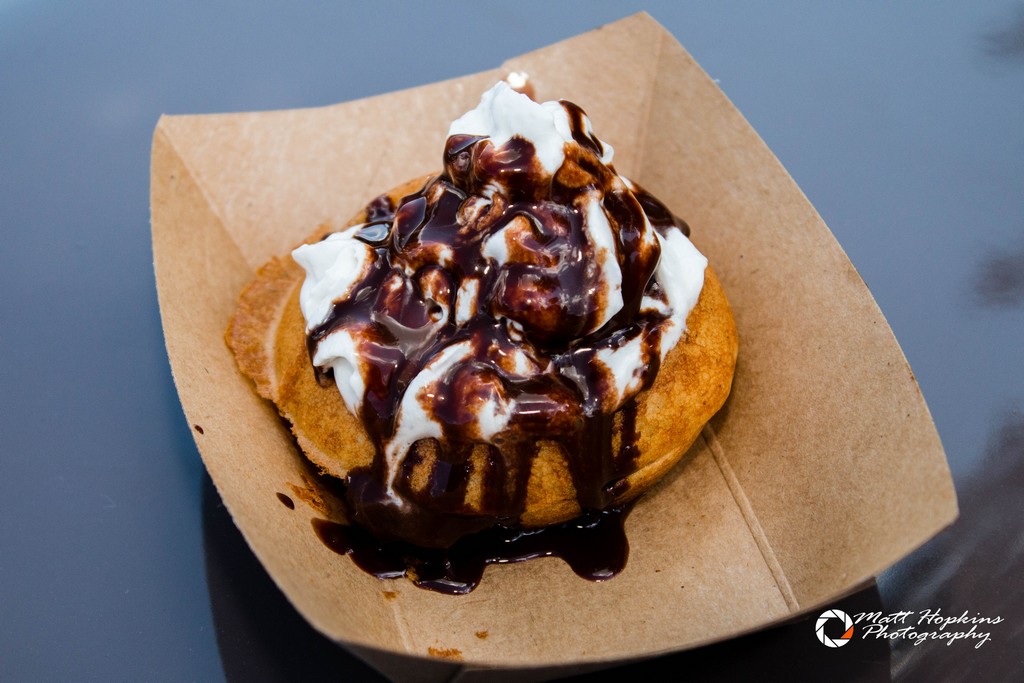 Next stop along the promenade is France Marketplace (#72). We picked out the Boeuf Bourguignon, which is Cabernet Sauvignon-braised Short Ribs with Mashed Potatoes ($6.25) and the Creme Brulee Caramel Chocolat – Caramel and Chocolate Creme Brulee topped with Carmelized Sugar ($4.25 – not pictured). As is often the case, Creme Brulee that is prepared en masse does mean the consistency of the custard can be an issue. Nothing to complain about when it comes to taste, but the custard was rather runny. The Boeuf Bourguingnon was very tender and tasty. 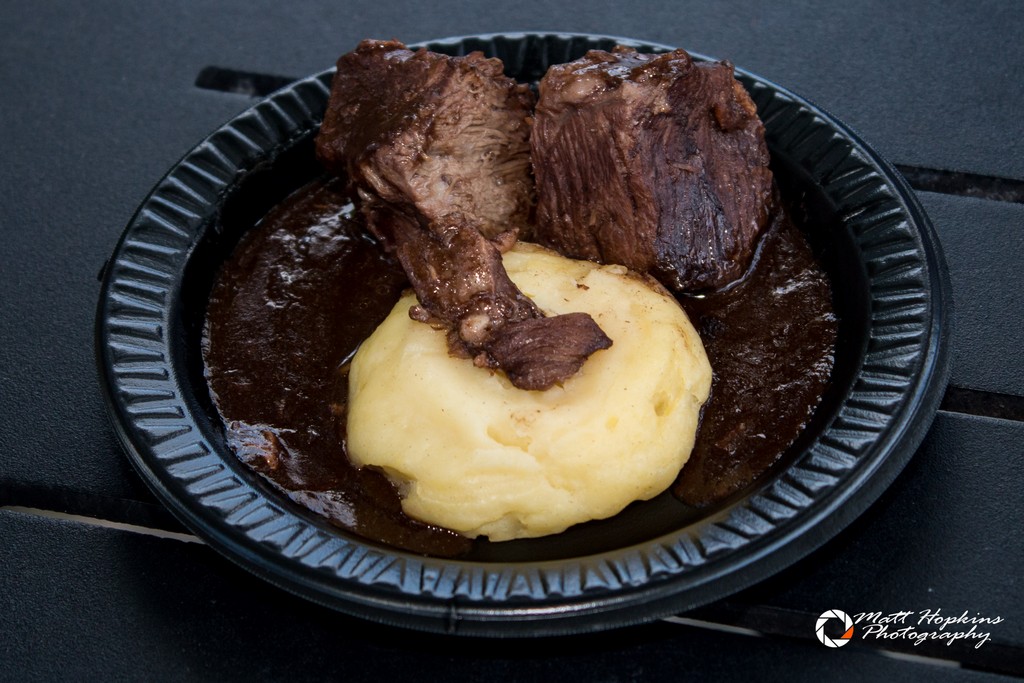 Moving past the United Kingdom area is the Scotland booth (#77), featuring the Fresh Potato Pancake with Scottish Smoked Salmon and Herbed Sour Cream ($5.00). A decent size piece of smoked salmon makes this dish worth the price – the sour cream and fresh pancake together made it one of our favorites. 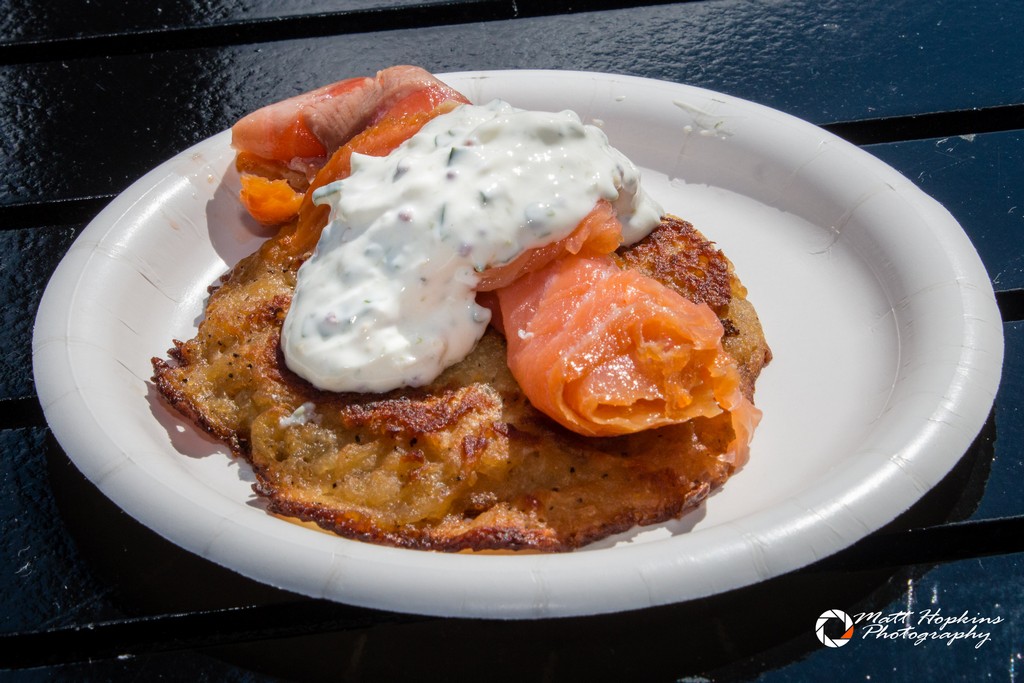 Finishing the tour around World Showcase, we end at one of the most popular booths at the entire festival – Canada Marketplace (#79). Expect long lines here as the day goes on. Only two dishes are served here: Canadian Cheddar Cheese soup with pretzel roll ($4.25) and “Le Cellier” Wild Mushroom Beef Filet Mignon with truffle-butter sauce ($7.75). We opted to have to a full size bowl of soup (or choup, as we refer to it) inside Le Cellier, but did pick up the filet at the stand. One of the most expensive food options at the festival, it doesn’t disappoint in flavor, although it isn’t a very large portion. But compared to the over $50 full 8 oz version served inside Le Cellier, it is a great way to sample the cuisine. 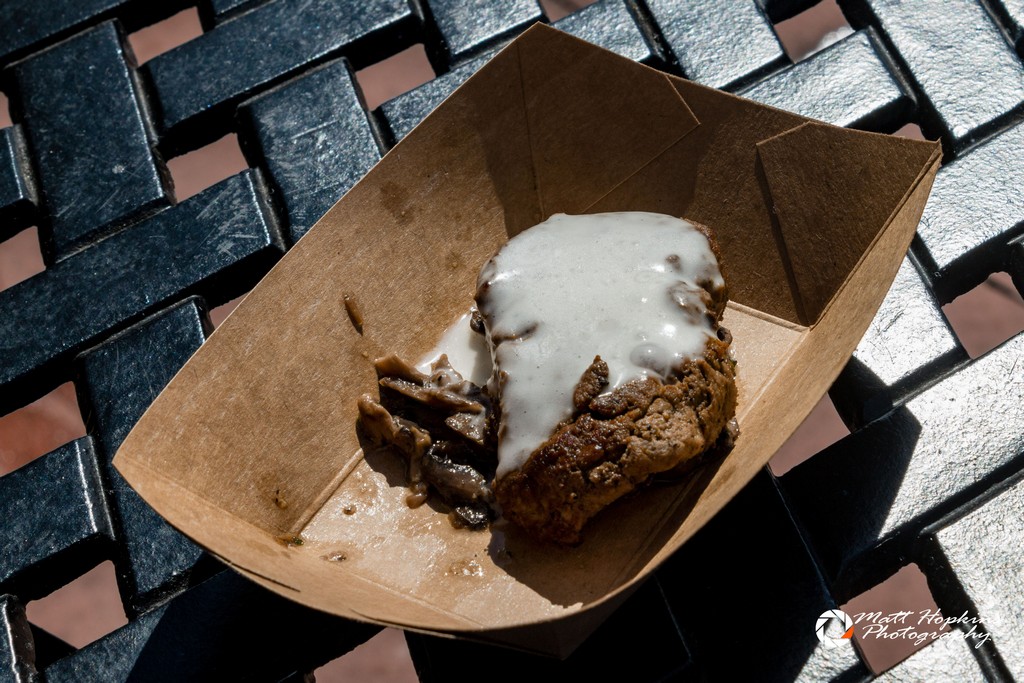 The Epcot International Food & Wine Festival runs daily through November 14th. Access to the Festival Center the Eat to the Beat concerts is included with any admission; food, beverage, seminars and souvenirs are all available at an additional cost.

The Festival Center opens daily at 9 a.m., and the food booths open at 11 a.m. (although you may find a few open 10 to 15 minutes early). Weekends are very crowded, and most evenings will also see large number of guests strolling World Showcase to enjoy the festival. To beat the long lines, visit as early in the day as possible.

For the latest on Epcot and other theme parks, attractions, dining venues and more across the region, be sure to follow Touring Central Florida on twitter @TourCentralFL & @androckb, and give our facebook page a like.