Florida’s fastest and tallest launch coaster – along with a pack of fierce Velociraptors – will be unleashed at Universal Orlando Resort in 2021 with the debut of Jurassic World VelociCoaster. Concepted and designed by the award-winning Universal Creative team in partnership with acclaimed filmmakers from Universal Pictures and Amblin Entertainment, this new species of roller coaster touts a series of intense maneuvers that will send guests catapulting up to 70 mph and more than 150 feet in the air with the swiftest of prehistoric predators. 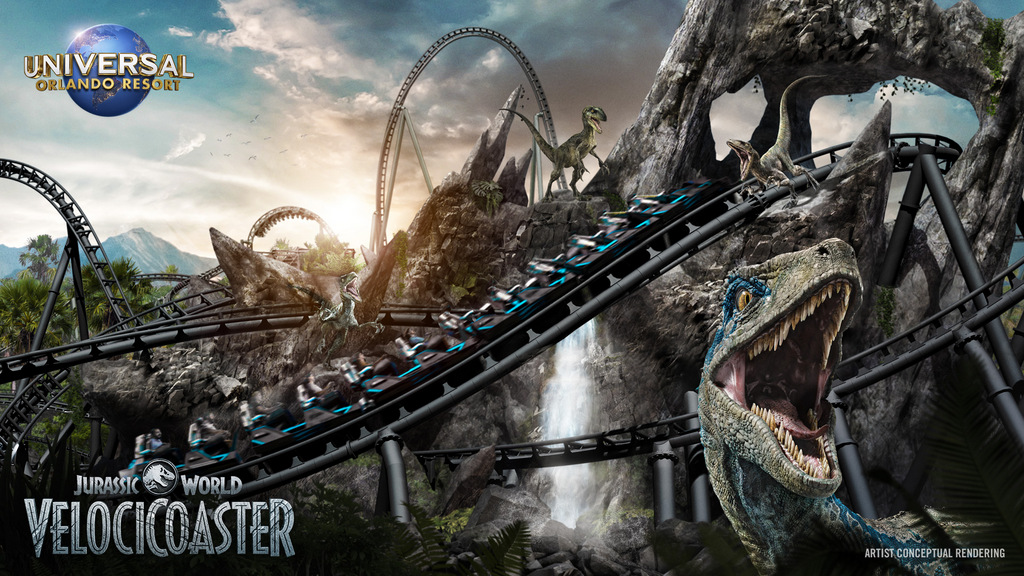 Opening at Universal’s Islands of Adventure theme park, Jurassic World VelociCoaster will be the world’s first coaster based on the blockbuster franchise and will feature an original story that expands upon the thrills, dinosaurs, and environments fans have seen on the big screen. Guests will join the original cast of the films – Chris Pratt as Owen Grady, Bryce Dallas Howard as Claire Dearing and BD Wong as Dr. Henry Wu – as Jurassic World unveils the next evolution of its “carnivore expansion”: the VelociCoaster, where riders embark on a high-speed chase and feel the rush of the hunt while racing alongside a nimble Velociraptor pack.


The Jurassic World VelociCoaster will raise the bar in extreme roller coaster design and become the ultimate experience for coaster enthusiasts and thrill-seekers. Spanning more than 4,700 feet of track and reaching heights of up to 155 feet, the coaster’s signature maneuvers will have guests twisting and soaring above land, barrel rolling just inches above the water, speeding through near-misses and launches within the paddock, and more…with just a lap restraint holding them in place. Get ready to:

Jurassic World VelociCoaster will be the next exciting addition to Jurassic Park at Universal’s Islands of Adventure. Only in this immersive land can visitors come face-to-face with life-size dinosaurs in incredible theme park experiences, including Jurassic Park River Adventure, where a leisure raft ride turns into a daring eight-story plunge to escape a ferocious T. rex; and Raptor Encounter, where guests can test their bravery and get up-close to Velociraptor Blue and the newest additions to the paddock – baby raptors – while learning more about the clever carnivores. Guests can also satisfy their cravings with all-new delectable food items inspired by Isla Nublar.

More details about the coaster will be revealed in the months ahead. For more information and to sign-up to receive exclusive updates about Jurassic World VelociCoaster, visit www.universalorlando.com.