Projects that will have an effect on water run off and drainage are required to file plans with the regional water management districts in Florida. In terms of theme parks, the filings normally don’t contain specific plans for attractions being built, but instead focus on impermeable surfaces (like concrete pathways, footers, etc.) that will be removed or added to the property. Although they don’t confirm exactly what’s coming to Adventure Island, the plans contain a lot of details to explore.


Adventure Island Project 90 encompasses the area Key West Rapids occupies in the southwest corner of the park. An overview of the area, showing the project boundaries which includes Key West Rapids and the pathways around it: 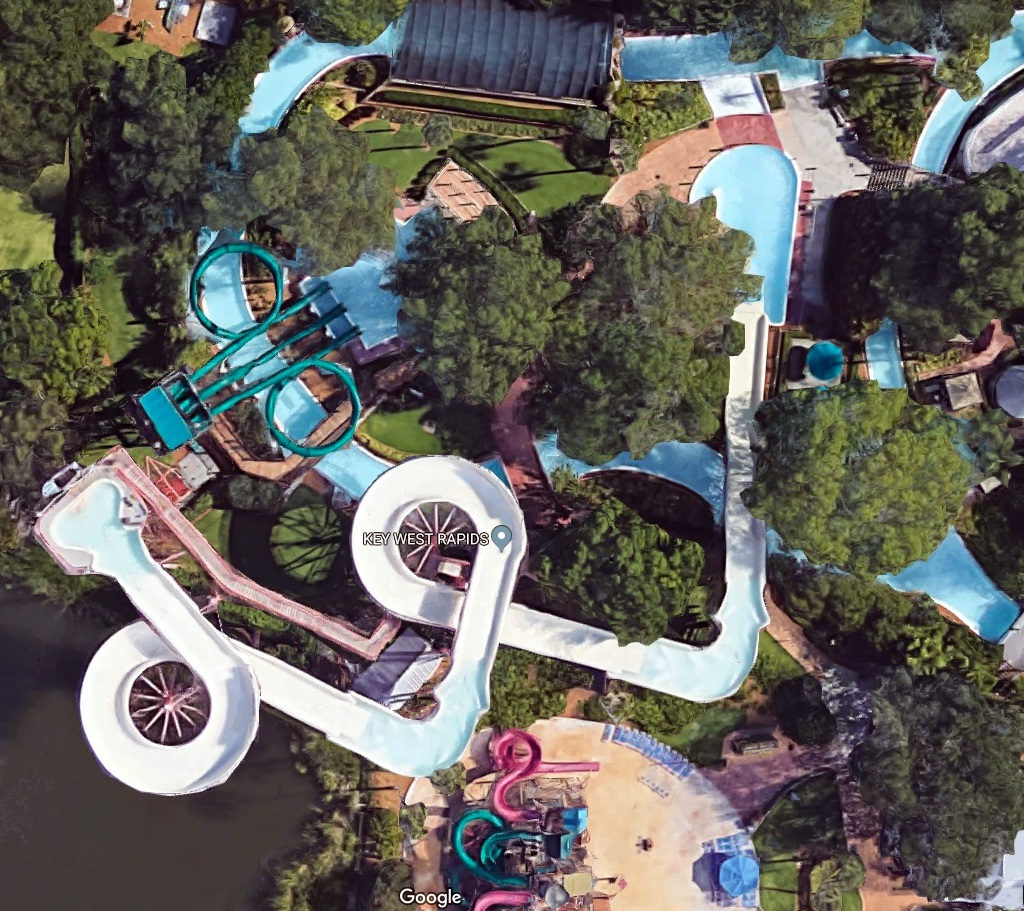 The plans for Adventure Island Project 90 confirm recent rumors that Key West Rapids will be removed, and a new attraction will be built in its place. 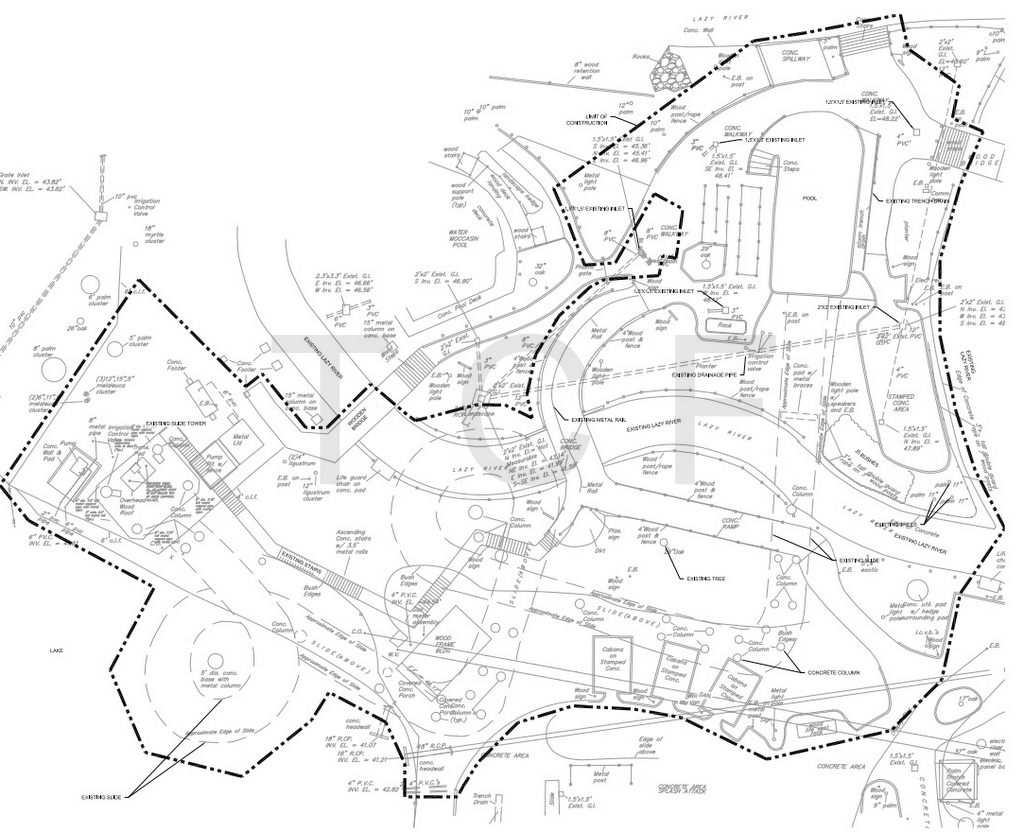 The demolition plan shows that most of the pavement around the current pool at the end of Key West Rapids (along with the pool itself) will be removed. A section of the pathway on the south side of Rambling Bayou (lazy river) and three cabana pads nearby will also be demolished as part of the project. 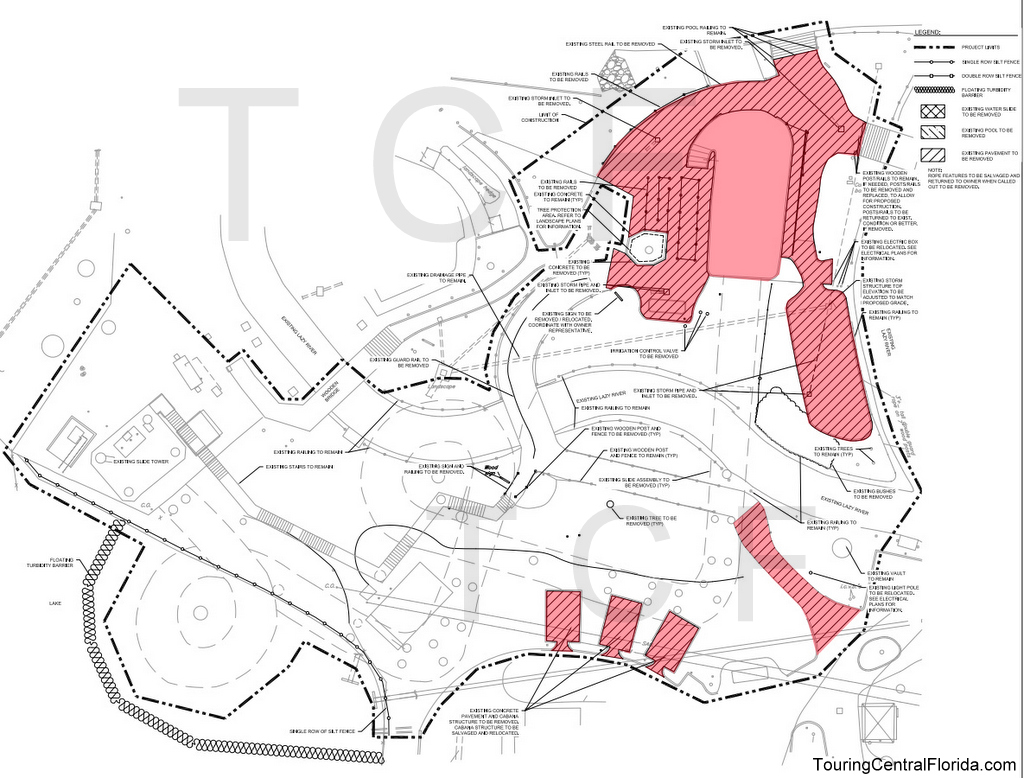 A closer look at the sections of concrete slated for demolition around the Key West Rapids pool area: 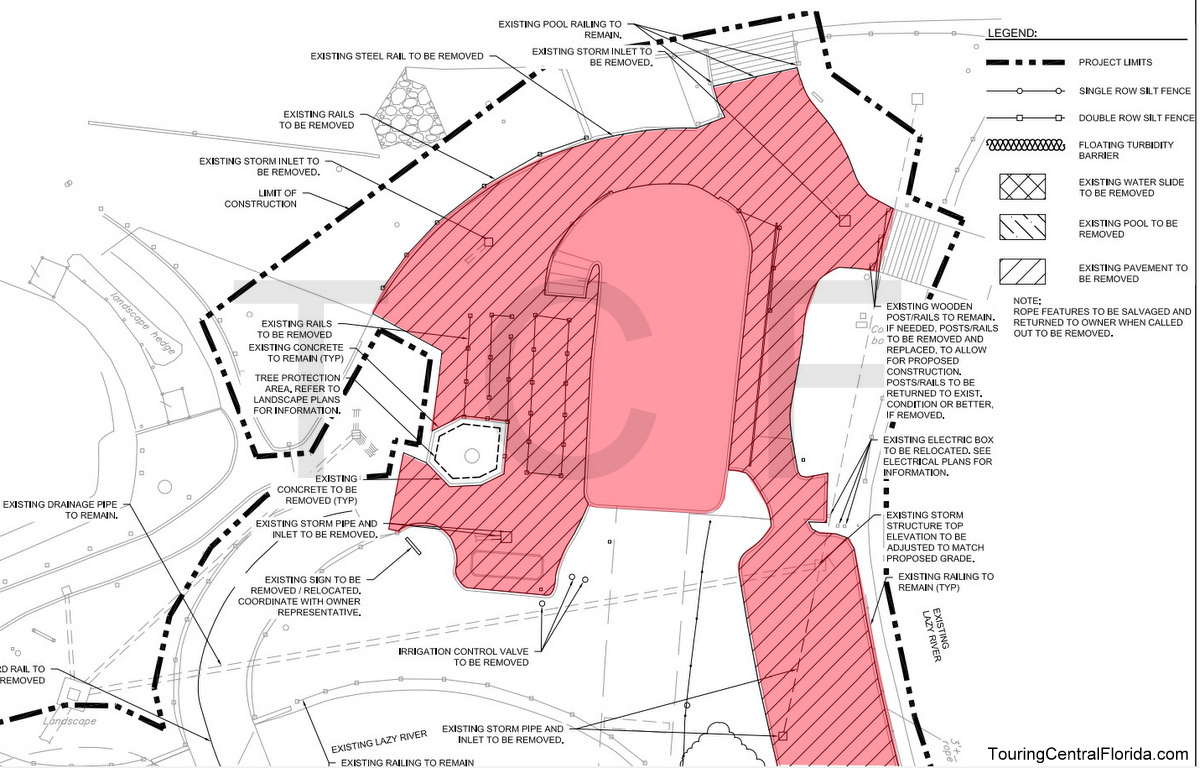 On the south side of Rambling Bayou, a closer look shows the text stating the slide assembly (Key West Rapids) will be removed, but the stairs and tower will remain (highlighted in yellow). 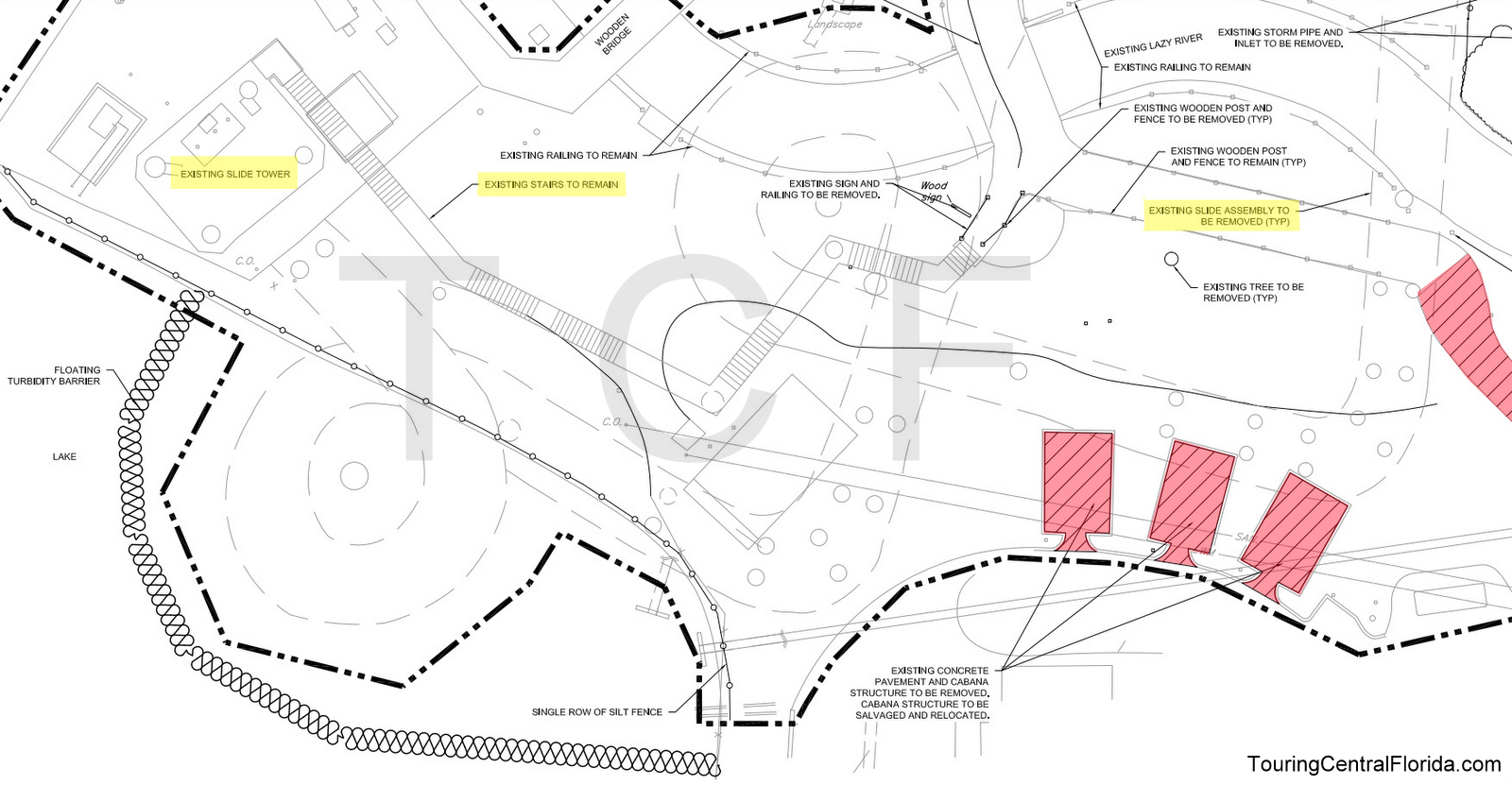 Another section of the plans show where new concrete will be poured (shaded in green). Based on these plans, it looks like a new queue will be added extending south over Rambling Bayou (new bridge shaded in yellow) and then extending west towards where the steps begin up to the Key West Rapids tower. The new bridge will also go over the reworked section of pathway. The three rebuilt cabana pads can also be seen. 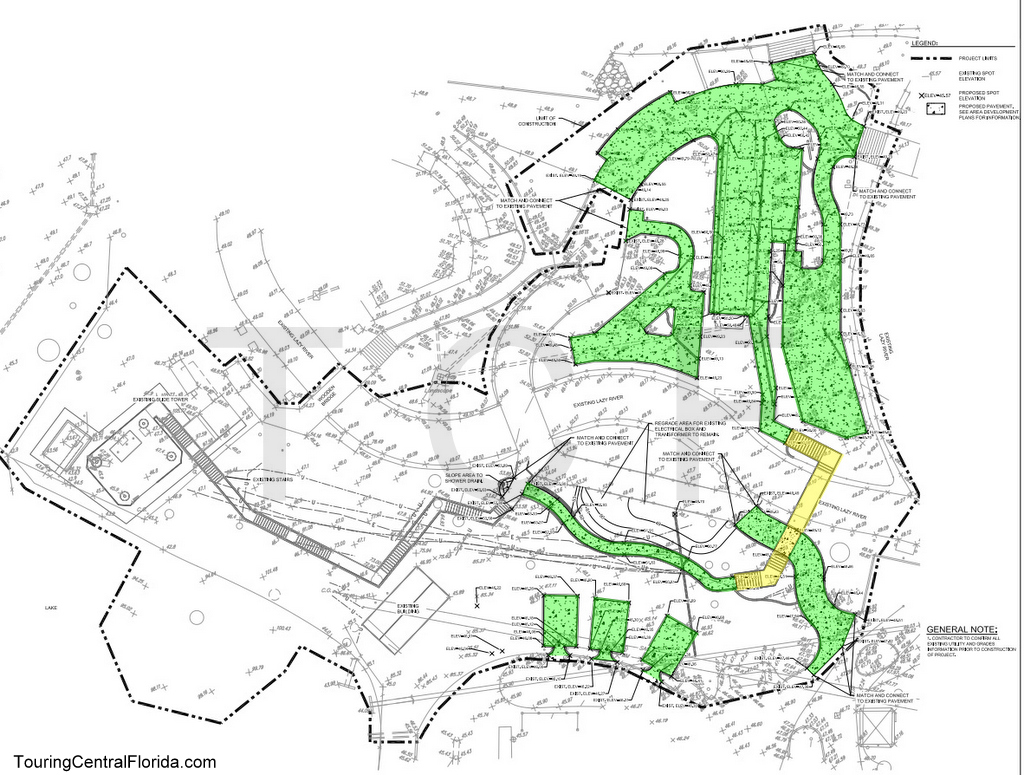 A closer look at the area that will likely become the start of the new queue (right) and concrete pad where the new attraction will finish (center). Also seen on the left side is a newly paved area that extends off the main path. That could be for additional seating or to provide an overlook for both Rambling Bayou and the last section of the new attraction. 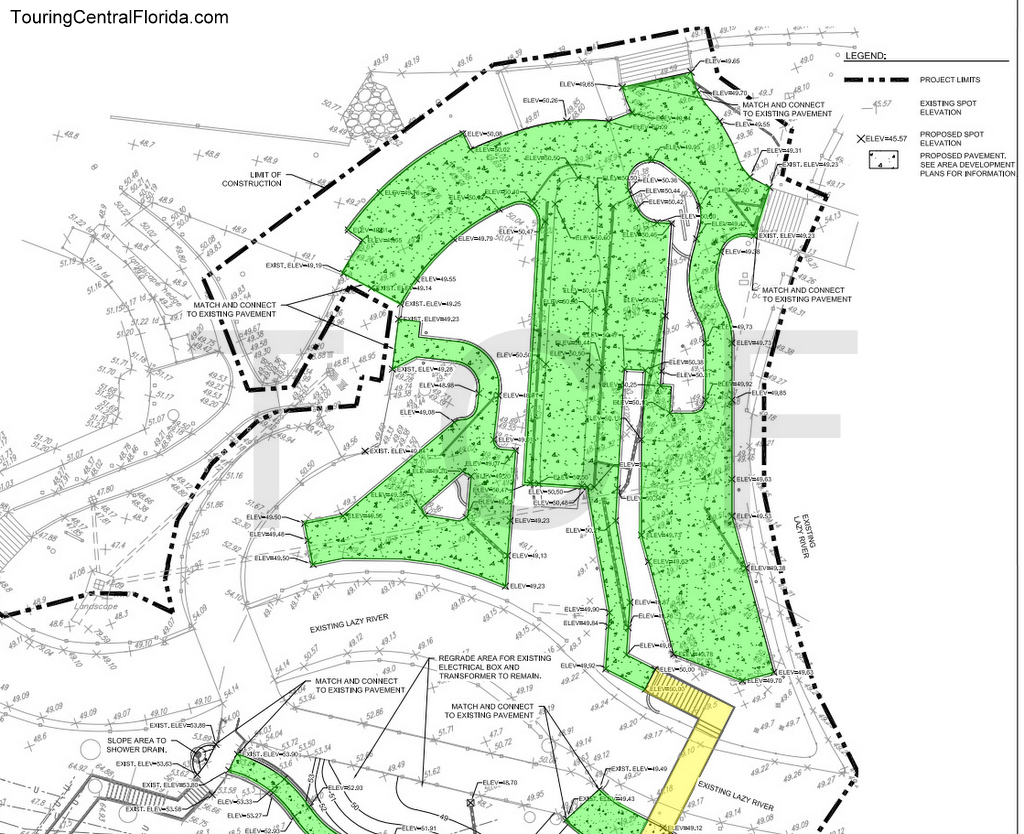 Drainage plans better illustrate what the end of the new water slide will look like (area shaded in yellow below). Instead of a pool in the ground, it appears the end of the slide will be built directly on the new concrete pad. The two darker lines on either side of the yellow shaded area are marked as trench drains, which would catch and divert any overflow water from the slide’s run-out chute. 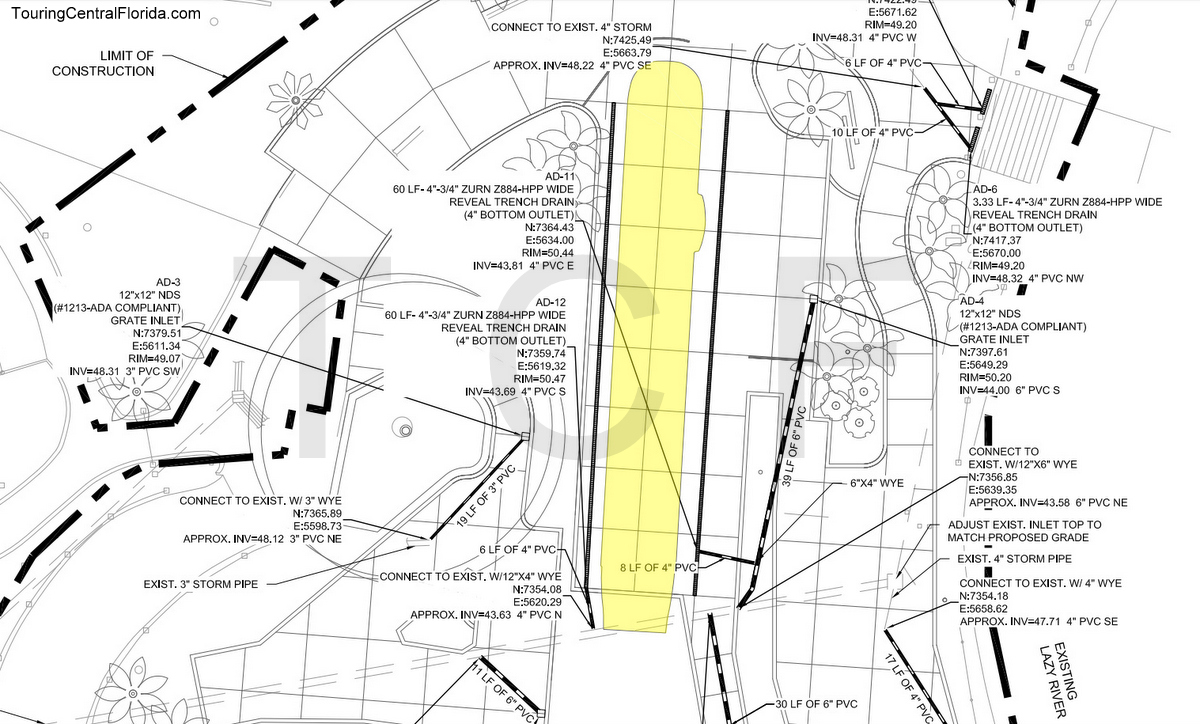 The type of slide, stats, elements, etc. are not detailed in the filings. But based on the plans, it will use the current tower that Key West Rapids begins on, and end in the same spot the attractions now ends. With the longer queue in the plans, it certainly appears they expect the new attraction to be quite popular when it opens.


As a reminder, the above information has not yet been confirmed by the park, and the plans are subject to change. There is no timeline for the project, but given the timing of the filing, the new attraction could be open in time for the start of the 2020 season at Adventure Island.

At Adventure Island, we are continually working to enhance the guest experience with park improvements. Our fans can learn more about park updates by following Adventure Island on Facebook, Twitter and Instagram.

A special shout out to Florida Coaster Kings for giving us the heads up the plans were published.

Join in the conversation online by using #AIProject90. For the latest on Adventure Island, Busch Gardens Tampa and other theme parks, attractions and more across the region, be sure to follow Touring Central Florida on twitter @androckb, @JacobTouringCe1, @TourCentralFL, and give our facebook page a like.