Pirate Island Hotel, the newest on-site accommodation at LEGOLAND Florida Resort and first LEGO Pirate hotel in North America, is accepting reservations for stays starting May 22, 2020. The pirates are recruiting buccaneers to join their crew with a limited time offer; buy two nights and receive one night free! Guests can book all of their future pirate adventures at www.legoland.com/pirateisland.

“Pirate Island Hotel will be a great addition to LEGOLAND Florida Resort,” said General Manager Rex Jackson. “Based on our consumer demand, the need for a third on-site accommodation has never been higher. Along with THE LEGO MOVIE WORLD, Pirate Island Hotel is a key component in the park’s overall growth and expansion as we continue to strengthen LEGOLAND Florida Resort as a multi-day destination.” 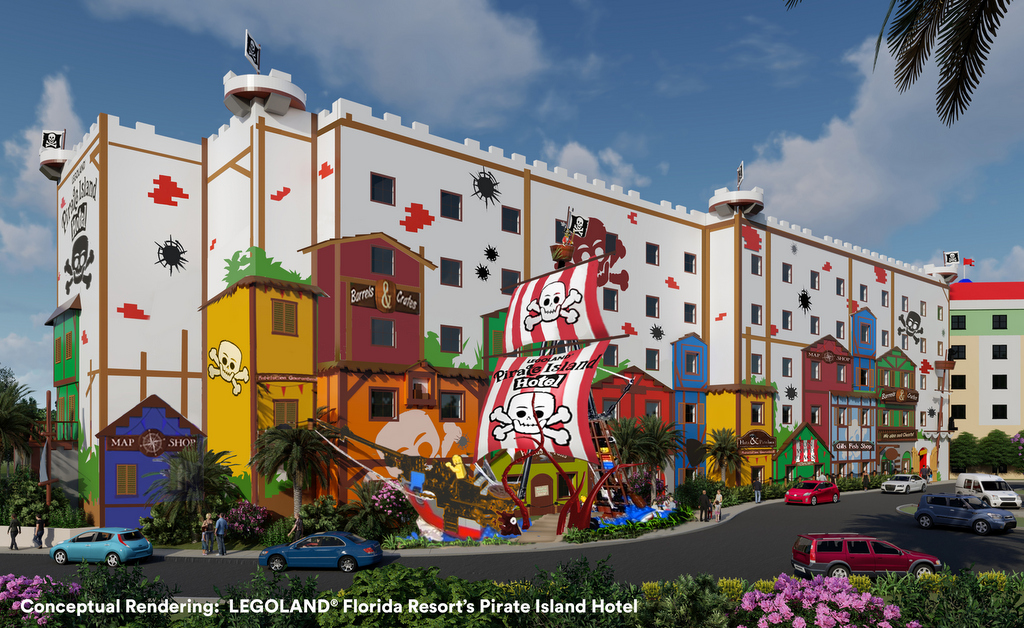 Pirate Island Hotel will be the third accommodation located at the park built for kids and will feature 150 fun-filled rooms (including four suites), a heated pool with pool deck (complete with LEGO soft bricks to build in the pool), hundreds of LEGO models, daily in-room LEGO treasure hunts, exclusive character experiences and is located only 130 kid-steps from the main entrance to the theme park.

At Pirate Island Hotel, each hotel room will include two separate spaces; a kid’s sleeping area and an adult area. The adult side of the room comes furnished with LEGO Pirate décor, a king bed and television, while the other separate area designed for kids will feature bunk beds, LEGO play areas and their very own television to watch all of their favorite LEGO movies! The new hotel rooms will also be fully themed with interactive LEGO Pirate models throughout and include an array of humorous decor designed specifically for a kid-centric family vacation.

“Pirate Island Hotel will be our most uniquely-themed hotel among our on-site accommodations,” said LEGOLAND Florida Resort Hotels Director, Kevin Carr. “Pirate Island Hotel amplifies the fun and humor of LEGO, along with the excitement of our theme park, into a complete resort hotel experience.”

We recently visited the park and saw the progress being made on the new hotel. Many of the architectural features shown in the concept art above can be seen taking shape on the construction site.

For the latest on LEGOLAND Florida and other theme parks, attractions and more across the region, be sure to follow Touring Central Florida on twitter @androckb, @JacobTouringCe1, @TourCentralFL, and give our facebook page a like.