A new tour was recently introduced at Disney’s Animal Kingdom. Caring for Giants is a behind the scenes tour allowing guests to get up close to the African elephants on their habitat on Kilimanjaro Safaris, and learn more about the pachyderms at the park as well as the efforts to help save the species on the African continent. 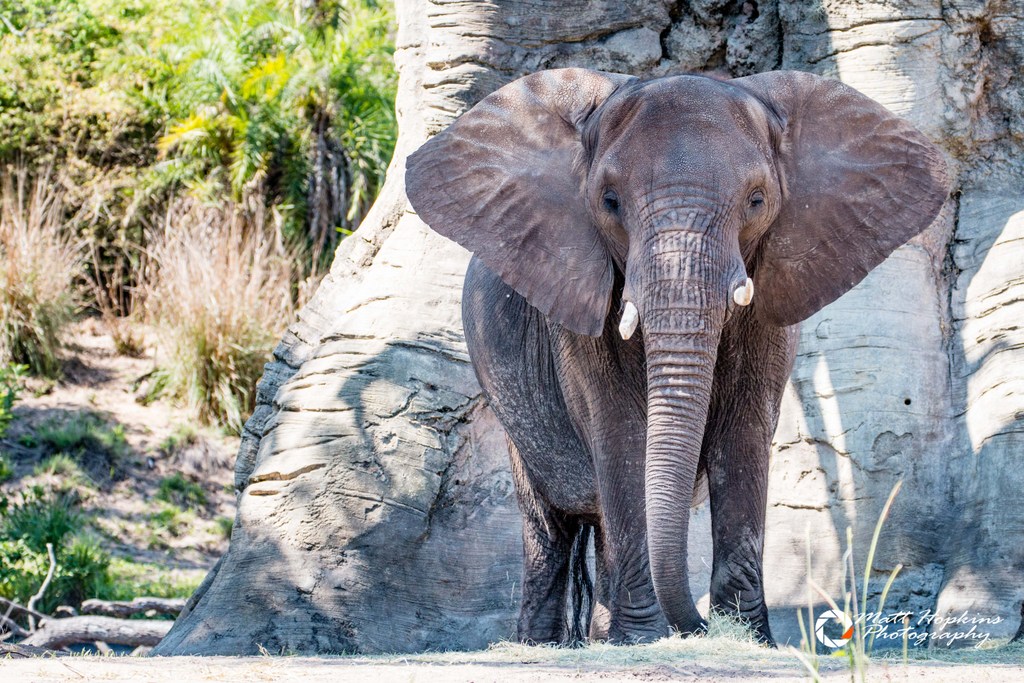 The Caring for Giants tour check-in is located at a booth just across from the entrance of Kilimanjaro Safaris. Guests are requested to arrive about 15 minutes before the tour time. A waiver is required to be signed by all participants (or their parents in the case of guests under the age of 18). 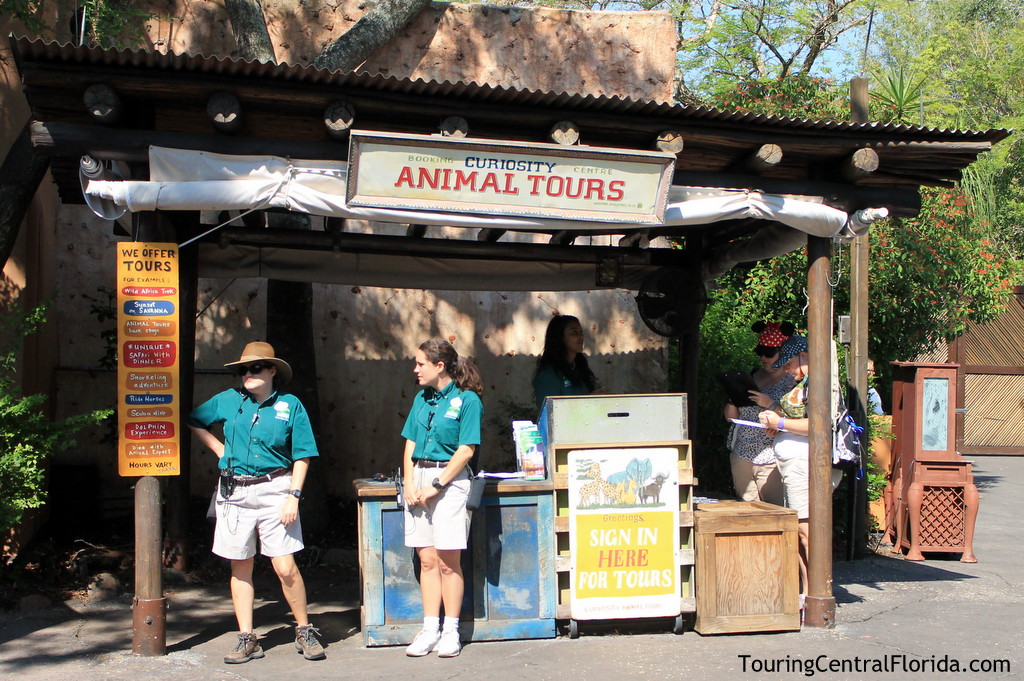 After checking in and signing the waiver, we were reminded there are no restroom breaks on the hour long tour. Guests are allowed to bring along a beverage as long as it has a resealable lid. There is no water or other refreshments offered while on the tour. We received our lanyards with our names on special Caring for Giants printed paper (more on this below).

There’s no formal waiting area for the tour; we were asked to wait just around the corner from the check-in booth in the shade. After everyone arrived, a cast member went over the basics of the tour, along with a reminder that while we were walking and riding backstage, we needed to keep our phones put away and not use our cameras, as no photos are permitted of non-guest areas.

The tour begins walking backstage via the gate next to the Kilimanjaro Safaris entrance. There isn’t much to see here besides the backside of a restaurant. A short walk brings you to the safari parking lot, where you may see a few of the trucks that take guests out on the attraction. Here you board a small air-conditioned bus for your ride out to the elephant habitat.

While driving to the elephant habitat, our driver described what we would be seeing on the tour, and also a little bit about what we were driving by on the road that encircles the Kilimanjaro Safaris attraction area. In about 10 minutes, we were pulling down a one lane gravel road and stopped at the bottom of a hill on the backside of the elephant habitat.

We were greeted by a member of the animal care staff and walked up the switchback ramp to the top of the hill, and onto the viewing area overlooking a large portion of the elephant habitat. It’s basically on the backside of the habitat that guests see when riding past on Kilimanjaro Safaris. The viewing area itself is broken into two halves; the tour begins on one side with the animal care staff member before moving to the second half when you meet with a cultural representative from Africa.

While the animal care staff member and cultural representative talk about the elephants and the efforts to save them in Africa, you are allowed and encouraged to watch and take photos of the elephants the entire time. While you sometimes catch a glimpse of the elephants while riding Kilimanjaro Safaris, the vantage point on this tour allows you to really take your time and watch the elephants across much of their habitat.

We were lucky to see several elephants out on habitat, including baby Stella, who was born in late 2016. She’s still relatively small compared to the other elephants, and was arguably the most active of the herd as she bounced around between the other pachyderms as well as going off on her own exploring.

At one point during our visit, baby Stella wandered around a corner of one of the walls and must have realized she could no longer see her mother or the other elephants. She vocalized and came running back; the other elephants immediately reacted and ran to form a protective ring around Stella. One or two of the larger elephants also vocalized, and all their ears flared out as is a natural reaction when they sense danger.

Both the animal care staff member and the cultural representative said we were very lucky to have witnessed that behavior, as neither of them had seen that happen before. It was interesting listening to their insight on the care of the elephants and also the real world efforts to help save them and their habitats in Africa, all while we got to watch them about 100 feet away.

While most of the focus is out on the habitat, there were also a few displays within the viewing area, including a table with a cutaway elephant foot and a sculpture made from snare wire removed from the African brush.

At the end of our time at the viewing area we were each give a large button/pin and a thank you for helping conservation of elephant habit with our purchase of the tour. We were also told about the paper in our name tags – which is actually made from recycled elephant dung. That’s right, the Caring for Giants name tags are printed on “poo-poo” paper! 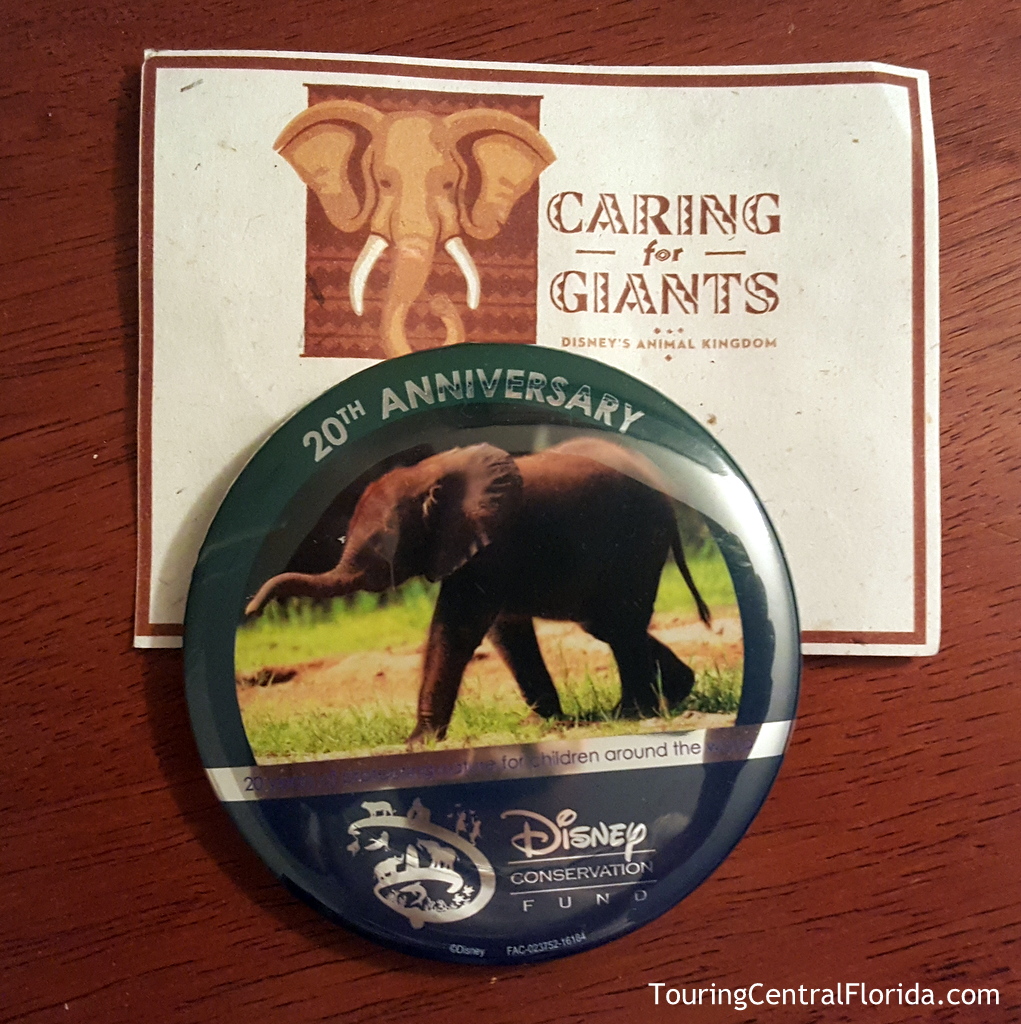 We hopped back on the bus for the return ride, and the driver again discussed some of the things we were seeing along the way, including the floating mountains of Pandora, which was still a couple of weeks away from opening when we took the tour. The desire to use our cameras to snap a few shots was strong, but we of course followed the rules of no backstage photography.

Upon our return onstage from where we left, we did have to return our lanyards, but we were told we could keep our “poo-poo” paper name tags as keepsakes of our tour. The Caring for Giants tour experience was great, and afforded us a chance to get photos of the elephants we have never been able to get even with dozens of rides on Kilimanjaro Safaris. It was very interesting to hear more about what it takes to care for the elephants, and to hear about the wild Africa that Disney is helping to save.

Special thanks to photographer Matt Hopkins for many of the images used in this article.